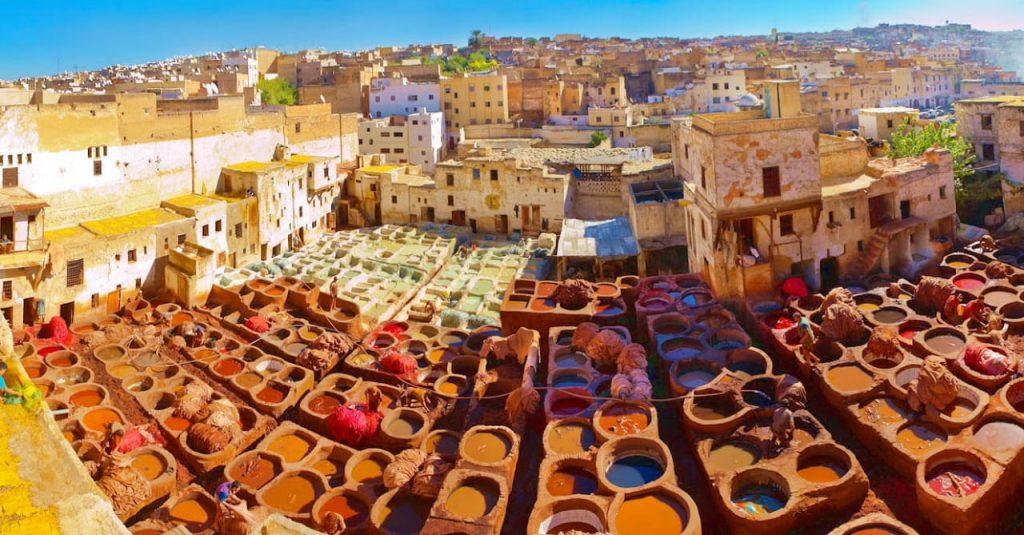 After we met at the place that we had agreed upon, you will start your Fes Sightseeing to discover the spiritual heart of Morocco. As you explore its mosques, synagogues, souks, and more. You will begin in Medina, one of the world’s largest walled cities. Wander the narrow streets, lined with fresh fruit, mounds of spices, intricately woven Berber carpets, and many other arts and craft objects from Morocco. Visit historic mosques, including the Quaraouiyine Mosque, founded in 859 by Fatima el Fihri, and the Andalusian Mosque, dating back to 860. Admire the city’s pretty fountains, such as the mosaic Nejjarine Fountain. Tour the Medersas (Koranic schools), dating back to the 13th century. Go to Batha Palace, now a museum of arts and traditions. Discover a tradition, that has remained unchanged for centuries at the Chouwara Tanneries. and shop in the souks, including the impressive textile Souk Attarine, one of the liveliest in the city. Look at the ornate green and blue ceramics of the Bab Boujloud gateway. And discover the concealed 17th-century Ibn Danan Synagogue inside the city walls. End in the afternoon, with a visit to Borj North or South to catch panoramic views of the Medina at sunset.

Fes is famous for its ancient walled city, which many compare to the old walled city of Jerusalem. It is the first of the imperial cities of Morocco since it dates back to the 8th century. It is also a pioneer in the Muslim cult of Morocco and has one of the oldest universities in the world. All these firsts make Fes a particularly attractive city with a lively and influential culture. Fes is particularly known for being the cultural and spiritual capital of Morocco’s center of art and science.

For the price and more information, please do not hesitate to contact us, and let us know about the number of people, and the dates of your excursion, we will get back to you as soon as possible.

In case you want to modify this excursion, just be in contact with us beforehand and we will make it happen.